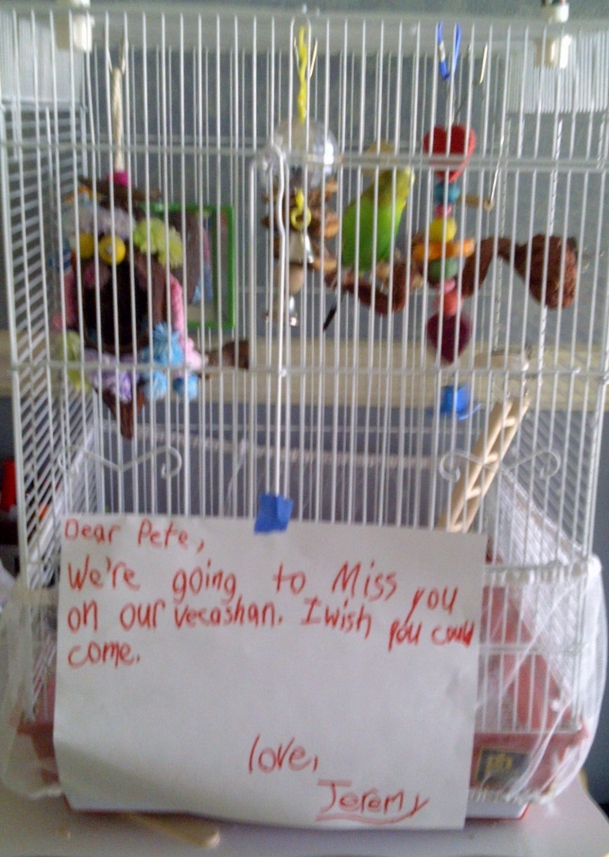 I was put in charge of taking care of my grandson’s pet while he went on vacation.  Pete the Parakeet was dropped off at my house while I was out.  This is what I found when I came home.  It is the most adorable thing I have ever seen, and I just has to share.  It just makes you want to say “awww….” .

Playing in the Rain

The JOY of playing in the rain.

“It’s a Miracle! “Exclaimed my grandson as he spied the rain falling from the back door window.   I opened the door and we both walked out to feel the wondrous drops of long-awaited moisture plop upon our heads.  It has been weeks since there has been any precipitation in our area.  The grass is dormant, except in the backyard where I have been watering it.  The trees are losing their leaves and nature is yearning for a clean drink of water.

It rained a steady rain for about 45 minutes.  This was enough to cause puddles to stomp in and for the air to smell fresh.  It is amazing how parched both nature and humans become when there is not any rain.  I hope this is a new trend in the weather.  I pray that we continue to produce enough rain to revitalize the crops, perk up the grass, and hydrate the trees.   Until then, I am grateful I was able to view the nectar from the clouds, and my grandson doing his dance of joy.

Shower in the Rain

Quotes from the Masters: Grahame

This is a challenge put forth by Bringing Home Europe where the writer, photographer, musician, or poet is inspired by a quote from a master.  This week’s challenge:   “There is nothing– absolutely nothing–half so much worth doing as simply messing about in boats.” Kenneth Grahame, from The Wind in the Willows

The Cub Scout pack that my grandson is a member of held its annual Rain Gutter Regatta boat races this weekend.  The balsa wood boats are pre-cut and ready for original styling by each scout. In the August 2002 edition of Boy’s Life, The Official Publication by Boy Scouts of America there are complete instructions on how to build a Regatta boat.  This is where my grandson began “messing” with boats.

Once the kit was purchased, my grandson and his dad set up in my garage to create the perfect Regatta boat.  They sanded the hull until it was smooth and then used a tack cloth to remove any reside from the sanding.  This was serious.

The next day, my daughter and grandson came over with a small can of polyurethane and a brush to paint three coats of the gummy substance over the entire boat.  Each coat had to be dried, sanded, tack clothed, then painted again to achieve a waterproof glaze over the boat.  In between coats of polyurethane, there was nothing to do but swim in the pool, which made the time go by quickly.

Next, spray paint was used to make the Regatta boat look good.  Luckily, for my grandson, I had several old cans of spray paint in the garage just waiting for his boat.  My grandson chose silver over the orange or green available. (I think the orange and green were from a former Halloween project.)

On Sunday, they all stopped by once more to put the finishing touches on their boating creation.  They added the keel and the rudder.  Super Glue was the choice of adhesive. (I did not know Super Glue could withstand water. I guess you learn something new every day.)  Curiously, not only did the keel and the rudder stick to the silver hull of the boat, but also stuck to the fingers of my son in law.  After a little administration of nail polish remover to those sticky fingers, the sail and the mast were applied.  The Regatta boat was ready to sail!

At the festivities, my grandson’s silver Regatta boat made a good showing.  With a little help of his robust blowing on the sail, the boat sped down the rain gutter with grace and actually stayed afloat.  When the races were over, proud scouts lined up for hamburgers and hot dogs, and to talk to each other about their boats.  It did not matter that my grandson’s Regatta boat did not take first, second, or even third place in the race.  What really mattered was that he was able to “mess” with the boat.  He put it together with his mom and dad and shared his handiwork with his friends.  Moreover, as the quote from Master Grahame so eloquently proclaims, “There is nothing– absolutely nothing–half so much worth doing as simply messing about in boats.” This act of playing did more for my grandson’s sense of family, sense of camaraderie, and sense of self than he realizes.  Thank you to the Cub Scouts for providing these very important lessons to him and all the other boys in the pack. 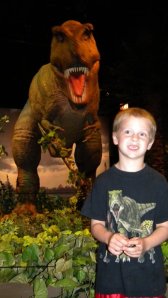 My grandson has been obsessed with dinosaurs since he was two years old.  He knows every name, in Greek and Latin terms, and every tiny description and fact about dinosaurs.  He has a robotic T-Rex, and scores of triceratops, Diplodocus, and velociraptors, sitting on his shelves in his bedroom.  He reads encyclopedias of dinosaurs and watches every movie ever made about them.  He is infatuated with these extinct creatures.

For his birthday, my grandson’s parents took him to the Field Museum to see the exhibit that housed the famous T-Rex, Sue.  They spent the night at the museum, sleeping amongst the dinosaurs in their sleeping bags.   My grandson met with other kids who were also enamored with dinos and they ran and giggled as the huge beasts watched. He was in heaven.

I do not remember ever being so besotted with any one thing in the same way my grandson is smitten with dinosaurs.  I know my son loved choo-choo trains when he was little, and then he liked fire engines, Lego’s, Nintendo, and… However, my grandson does not seem to be willing to leave the dinosaur craze behind him.  He has become interested in Godzilla, but it is only a made up creature similar to a dinosaur. Oh, and he likes Lego’s now, but he made me buy the new dinosaur collection.

A friend of mine insinuated that maybe there was something wrong with my grandson’s fanatical love of dinosaurs.  However, I do not agree.  I think it is great that he is able to stick with one thing and really study it.  His preoccupation keeps him entertained and using his imagination.  What could be so bad with that?

Who knows? Maybe he will grow up to be a scientist, zoologist, or a paleontologist.  Possibly, with his skill and passion for looking in-depth at things, he could find a cure for cancer or unearth answers to world problems.  Or else, he could become an awesome Dad who can have interesting conversations with his own son about dinosaurs.  Whatever he does with his life, I am sure that he will do it with zeal and curiosity, and I will be extremely proud of him.

Do you know any children who are obsessed with something?  Feel free to share your story.

Unauthorized use and/or duplication of this material without express and written permission from this blog’s author and/or owner is strictly prohibited. Excerpts and links may be used, provided that full and clear credit is given to Jamie Nowinski – Grandmother Wisdom/Grandmother Musings with appropriate and specific direction to the original content.