RSS Feed
← Not the Person We Used to Be
Book Review: Brides of Prairie Gold by Maggie Osborne →

Memories of a Day Not Forgotten

Today on the 15th Anniversary of 9/11, many of us reminisce on where we were and what we were doing during the terrifying attack on our Country.  Unlike any other time in history, we have the ability to share our experiences on social media, instantly.  This is not only amazing, but also informative for the generations who were not alive during 9/11.  We need to tell our stories and continue to remind others that we should not forget. 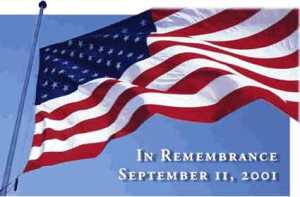 This is my story.  It is not extraordinary in comparison to other stories, however, a slice of an everyday person’s life on that day.

“It was sometime around 8:00 A.M. in a suburban Catholic elementary school outside of Chicago that an announcement was made over the school’s intercom.  The announcement told us to go on a hard lockdown.  This meant to lock the classroom door, turn off the lights, and close the blinds.  The students and I followed the directive quickly; once we were done, another announcement came over the intercom.  This time is was our Pastor. His voice was very sad when he told us all to stand and pray for terrible tragedy that had occurred.

I had a terrible feeling in my stomach as I prayed with my students in tandem with our Pastor’s voice.  No one had told us what was happening. We were just praying for some unforeseen calamity.  I had seventh graders in my classroom at this time, and they were whispering and talking with fear.

I turned on the TV attempting to find out what was going on, but it would not give us a signal.  I turned on the radio to a local radio station, and the reports of what had happened flowed from the boom box, shocking us all.  Every radio announcer was excitedly trying to understand what was happening. My class and I too, were listening very hard to the reports to piece together the story of planes crashing into the World Trade Center.

When my teacher’s aide knocked on the locked classroom door, the students and I jumped in fear.  I let her in and relocked the door. I whispered to her asking what was going on as she had been in the office and would know more information.  After hearing the facts from my aide, the fear and panic welled up once more.  My immediate concern was of my ability to keep my students safe.  I was also worried about my family. My son and daughter were both at different schools and my husband was at work.  Would I see them again?  What if this was an attack on the whole Country?  Would we be bombed? Were we safe?

The students and I were able to pull up some pictures on the Internet and some shocking news.  A few students were worried about loved ones who were either in New York or on flights to New York. Mayor Daley closed down the city of Chicago, sending thousands of people home.   Some of the students were crying, and I tried to give comfort. The Principal then came over the intercom. She carefully explained what was happening and told us all to go to the Church.  That really frightened me.  Was the world that I had known ending?

The silence in the Church and outside was eerie.  The common sound of airplanes flying to Midway Airport was gone – all airline flights cancelled. It is ironic how one misses those everyday sounds when they are gone.  All I could see was a beautiful blue cloudless sky through the open stained glass window where I sat.  The entire school stayed in the church for hours and prayed.

Later that day, when I was finally home with my family, we watched the unbelievable and the horrible events of the day on TV.  Each of us had a story of where we were and what we were doing when the planes flew into the World Trade Center, the Pentagon, and crashed into a Pennsylvania field.  It was a day none of us will forget.”

Regardless of what you believe about the events of 9/11 and who is behind this attack, the memories of how you felt that day are still relevant.  We need to share our stories in hope that a conscious effort is made toward peace. A peaceful and loving world can be had through education, compassion, communication and prayer. Blessings.

Unauthorized use and/or duplication of this material without express and written permission from this blog’s author and/or owner is strictly prohibited. Excerpts and links may be used, provided that full and clear credit is given to Jamie Nowinski – Grandmother Wisdom/Grandmother Musings with appropriate and specific direction to the original content.

Posted in Words of Wisdom and tagged 9/11, America, Catholic, Grandmother Musings, Memories of a Day Not Forgotten, Never Forget, Prayers for 9/11, September 11 2001, Stories of 9/11, teaching about 9/11. Bookmark the permalink.

What good is living life if you don't share all the experiences, mistakes, and knowledge you have gained? I am a grandmother, a wife, a mother of two grown children, a Jr. High Teacher for almost two decades, an elementary principal and I want to share my experiences.
View all posts by bigsmileu1 »
← Not the Person We Used to Be
Book Review: Brides of Prairie Gold by Maggie Osborne →