Wonder has a name: DERECHO 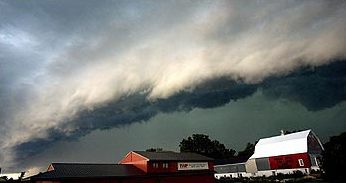 “A long lived Derecho storm system moved across the Chicago metro area yesterday morning.” This system according to The Examiner caused considerable damage and power outages to many in the Chicagoland area.

My question is…what is a Derecho and where did this term come from all of a sudden? It seems that in the last week or so, many meteorologists and weather reporters have been spotlighting this new word. The word is so new, that at Dictionary.com, the only entry they have for the word is its Spanish origin.  There is not a definition.  If you want a definition, there is one at Wikipedia.com.  It states that a Derecho, pronounced (day-RAY-cho), is a widespread, long-lived, straight-line windstorm that is associated with a fast-moving band of severe thunderstorms.

Source: The USA TODAY Weather Book by Jack Williams
As the line of thunderstorms moves along, usually to the east, humid air flows up into the storms. Cold air from aloft descends to create winds.

That is great, except that we had a word for this type of windstorm.  It was called a Squall Line. However, I looked the term Squall line up and found some differences between a Derecho and a Squall line. A Squall Line is defined in The American Heritage Science Dictionary “…as a line of sudden, sometimes violent thunderstorms that develop on the leading edge of a cold front. Squall lines can form up to 50 to 149 miles in front of an advancing cold front and can be more than 99 miles long. The thunderstorms of a squall line can produce severe weather conditions, such as hail and rain accompanied by winds of over 60 miles per hour; they are also associated with tornadoes, especially in spring and early summer.”

This all sounds very similar to the newly touted Derecho, but according to Jack Williams at USA Today, “Derechos are the result of squall-line thunderstorms that create one downburst after another as they move along. Downbursts are winds that blast down from thunderstorms.  Occasionally, a Derecho thunderstorm will spin out a small tornado or two, but straight-line winds do most of their damage.  Derechos are most common on the central and northern Plains and across the Midwest into the Ohio Valley in the late spring and during the summer.”

Hmm… I guess a Derecho is not a Squall line after all.  However, why have I never heard of this weather term before? In my research, I found out that a man named Gustavus Hinrichs, the director of the Iowa Weather Service in the 1880’s coined the name, Derecho.  It comes from a Spanish word meaning, “straight ahead” or “direct”.  Hinrichs intended it to contrast with “tornado” which comes from the Spanish word for “turn”.  Okay, so the word has been around for a while. I just wonder why the meteorologists and weather reporters feel the need to bring “Derecho” out of the closet, now?

Jack Williams states in his article at USA Today, “…that while most people in the Midwest are unfamiliar with the “Derechoes”, these windy storms are very common.”  Well, darn, if they are so very common, why haven’t they been mentioned more often?

I have two possible answers to this question.  The first is that meteorologists and weather reporters want to look super intelligent, so they pulled out this weather term to impress their viewers.  The second is that our weather is changing so rapidly and is so erratic that a term to describe it had to be found.  Consequently, the super intelligent people in charge of the weather scoured through the tomes of weather history to find just the right word, “Derecho”.  I suppose it is feasible that our record-breaking weather this year is beyond even the experts’ description.

I am wondering how the fall and winter weather will be. If the last seven months have given any indication, we are in for a few more record-breaking days and possibly a few new words from the back of the meteorologist’s closet. I have one they can use… “Deep-poo”.

What good is living life if you don't share all the experiences, mistakes, and knowledge you have gained? I am a grandmother, a wife, a mother of two grown children, a Jr. High Teacher for almost two decades, an elementary principal and I want to share my experiences.
View all posts by bigsmileu1 »
← Twin Awards
Quotes From the Masters: Ovid →